Here is the first post of -i hope- many posts dedicated to web development !

Exoplatform comes with a frontend portlet framework called Juzu to build interactive client-side UI, but the platform allows you to use the technologies you are confortable with . My organization recently modernized its web development stack with React as a main component. So when we started our intranet project, we decided to use it in portlet development as well. If you dont know React, take a look at the site first. I’m not here to advocate React, but it’s a really good tool to manage complex UI and to easily reuse components accross applications.

You’re still there ?! OK so let’s learn how to set up a simple reactjs and nodejs development stack, build a standalone app, and then package to a portlet.

But don’t adventure in javascript development without a goddamn stack or it’s going to suck ! The main reason is that javascript unlike java doesn’t have a statically strongly type system, nor a module system. Fortunately some standards has emerged from the mess since a few years ! You can now use any “high level” language like coffeescript, typescript, ES2015 (ex-ES6). However, these languages will not execute in the browser, except for ES2015 which is the next version of javascript but still only partially supported. So you have to “transpile” these languages to a good old “ES5” syntax. ReactJS also comes with a syntax called JSX which mix JS and HTML tags, so we’ll have to transpile it as well. Babel will be a good guy for transpiling task, and we’ll use this time ES2015.

In order to efficiently manage JS library dependencies, we will use nodejs and npm. We’ll then use maven to build and package the portlet part.

OK now it’s time to open your IDE, If you dont have one try Atom. It is lightweight and opensource and works well with JS. Dont forget to install JSX plugin !

Source code is available here. Please follow instructions for building and deploying at the Portlet section.

Let the default values for this time :)

Note : react has a core part and a specific lib to render to DOM

At this point, package.json has been updated (with the –save argument), and node dependencies installed in “node_modules” directory. package.json must be added to version control so anyone can build your project.

We are using the ES6/ES2015 syntax with class inheritance. The React lifecycle in short will : init the state, mount component to DOM, fetch data from API and render. There’s a method corresponding to each lifecycle step. For example doing fetch in componentDidMount is the safest way because of asynchronous update.
Whenever the state is modified, render method is called and check what part of the DOM has to be updated.In the example we wont do actions so state will not be modified. A good React pattern to use whenever possible, is to manage state at the highest level component (here Activities) and pass data to child components (here Activity) via the “props”. So we could replace the Activity class with the react stateless function pattern, in order to get rid of the useless lifecycle.
Did you Notice the weird attribute “dangerouslySetInnerHTML” ? React is xss proof, but sometimes you have to inject preformated html code. Do it if html has been sanitized server side :)

Note : we include the “bundle.js” script that will be generated with webpack.

Note : Webpack will use this file as an entrypoint from which to pack all the imports.

Here we declare file “index.js” just created before. Then we define the ouput folder of the bundle.js. This folder is corresponding to maven target dir (it will be usefull later) Then we define the babel-loader, which takes over the transpilation part. Define Plugin is just transmitting NODE_ENV variable to loader parser, in order to prune DEV code in React lib at build time.

Note : in a real project, you should consider a library like gulp to externalize complex build tasks and be OS independant!

To call the script :

Note: you have to record real api responses in static files before (here you can pick in source project).

Look at the size… don’t worry it is a not optimized yet !
The map file will map source lines from the generated bundle code to the original es2015 file. It will be downloaded by browser only when you open the debugger ! Note : static files are not watched, you have to restart server. We could improve that by writing a simple gulp script for example, and add it to start script.

and enjoy the result at http://localhost:3000. It should look like this : 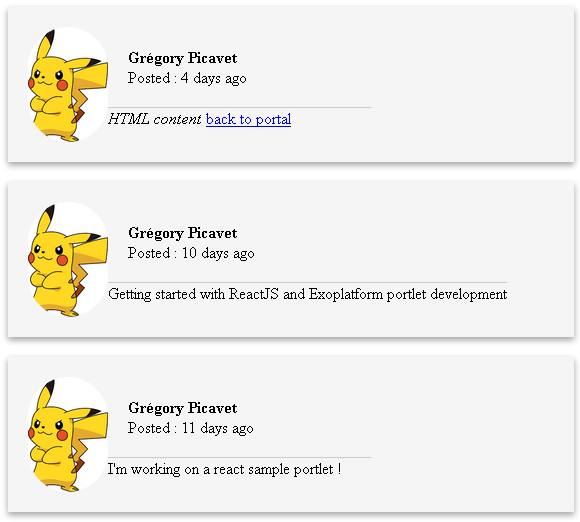 So we set NODE_ENV=production in order to disable React dev mode (it helps a lot, be its a lot slower), and started webpack with optimizers.
After optimization, the bundle will be 3 times smaller:

Note : did you notice few warnings from the optimizer ? Well, library all not always cleaned :)
Important : optimized bundle should not be too big (< 1 Mo), so for large app you can look at webpack’s code splitting feature.
Note : you can still debug in original files in production, as map file is also updated !

You’re done for that part ! You could use this app outside Exoplatform but you’ll have to adapt the proxy routes in server.js to exo backend (easy!) and deal with sso authentication (actually the hard part !)

Note : These modules will be automatically loaded by Exoplatform when loading portlet.
There are two main module styles in javascript : AMD and CommonJS. When transpiling ES2015 to ES5, babel replaces imports with CommonJS style. As Exo uses AMD modules it will automatically adapt them. But some libraries require manual adaptation, it would be the case of React if we had to load it apart from the bundle.js.

Incompatibility with the gatein minifier

Those who are used to exo can skip this part !